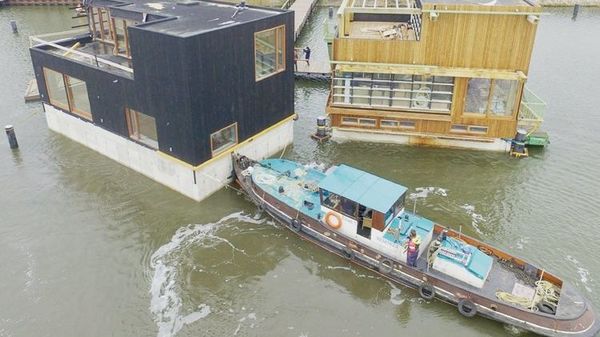 Sea level is rising at an accelerating rate due to climate change. Several countries that have coastal borders and islands are looking for solutions fearing they will be submerged.

One of those countries that adapts to this challenge is the Netherlands, where more than a quarter of the area is already below sea level.

The people of Amsterdam, the capital of the Netherlands, have created a visionary floating district called Schoonschip, which means “clean ship” in Dutch.

An architect from Space & Matter, a company that designed Schoonschip, said the population and climate change were increasing rapidly. This is why the company decided to give us space on the water.

Climate change is expected to put 800 million city dwellers at risk by 2050, according to the World Economic Forum.

“With Schoonschip, we want to lead by example and show how living on water can be a great and better alternative for people and our planet,” one of the architects told WEF.

In the Schoonschip district of Amsterdam, more than 100 people live in 46 floating houses.

Schoonschip Amsterdam is home to 105 residents who live in 46 houses on 30 water plots.

All the houses have green roofs which help collect rainwater. The water is preheated by the sun by circulating water through solar collectors. Only rainwater is used to flush the toilet.

Solar panels are connected to a smart grid where residents can exchange energy, submerged heat exchangers for heating and cooling. Water treatment technologies are used to recover energy and nutrients from wastewater.

In this floating village, residents have agreed to give up their cars and share electric cars instead.

According to space & matter, living on water offers a great solution for places where climate change and rising sea levels are an imminent danger.

Floating communities are not a new concept, they have been around for generations in some parts of the world. For example, the Bajau people of Southeast Asia live on small barges off the coasts of Indonesia, Malaysia, and the Philippines. In Cambodia, Tonle Sap Lake is home to hundreds of floating villages.

In recent times, interest in aquatic life has grown as the world seeks solutions to the dual pressures of population density and sea level rise.

On the other hand, there are other cities that are looking underground to find a solution. For example, the Finnish capital Helsinki has created a multitude of underground facilities, including sports venues and an emergency shelter, and Montreal in Canada has an “underground city” comprising of shops and hotels under its streets.

UN-Habitat has estimated that by 2030, three billion people, or about 40% of the world’s population, will need access to adequate housing.

Do physical assets offer investors a haven from inflation?